The Politics of Student Loan Debt By Steve Burleigh 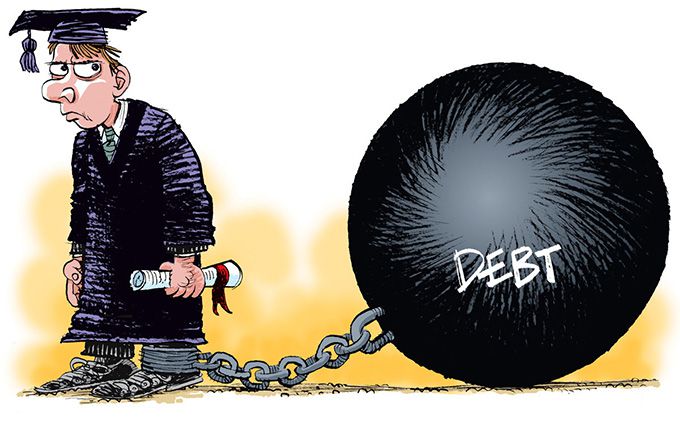 The Politics of Student Loan Debt

Among the many issues that the Democratic presidential contenders debated last night in Miami was the increasing burden of student college debt in the U.S, which currently stands at about $1.6 trillion. The average debt for college graduates is about $29,000, but the average debt for African American graduates is more than $34,000. Compare this to American auto debt, $1.1 trillion, and lower total U.S. consumer credit card debt which is $1.04 trillion. Years ago, it would have been unthinkable that U.S. credit card debt would be surpassed by college indebtedness. Several of the candidates have suggested various methods for dealing with the problem, ranging from complete loan forgiveness to free college tuition at public colleges, and some candidates propose a combination. One thing all candidates agree on is that paying for these ambitious proposals will require higher taxes. Elizabeth Warren proposes a wealth tax on individuals, and Bernie Sanders proposes a tax on Wall Street transactions. The issue is bound to pick up steam not only in the upcoming presidential primaries, but also in the general election where Donald Trump was forced to pay a $25 million fine for bilking students out of their money in his Trump University scam.

The Washington Post posted a video explanation of the some of the Democratic candidates’ approaches to free college and debt forgiveness. For a slightly more detailed explanation check out this NPR article, Democratic Presidential Contenders Propose Free College and Student Loan Forgiveness.

College debt is an enormous problem confronting voters across the entire socio-economic spectrum regardless of age or race. The current college loan system preys on families who fall into the financial aid income/asset donut hole. They make too much and have too many assets to qualify for need based financial aid, but they lack the resources to pay for a traditional four year college education. What do these folks do? They borrow tens of thousands, often hundreds of thousands, to make college happen for their children. The issue has suddenly moved off the financial pages and landed smack in the middle of the presidential election zeitgeist.