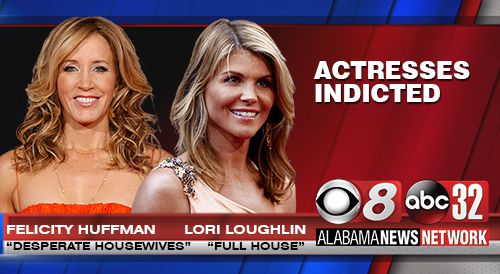 Most of you know me as an award winning actor/writer/producer whose legacy is already emblazoned in the pantheon of entertainment narcissists and bloviators. But some of you may not know that I am also a well established college counselor, or as we refer to ourselves to sound more legit with rich white folks, independent educational consultant. Pretty hoity-toity stuff. And the last 24 hours has been a real whirlwind. Since the feds made Bill Singer do what Rod Rosenstein only “joked” about doing, i.e., wear a wire exposing the frailties of our most vulnerable population, I‘ve barely had time to cook the books over at my personal Side Door College Admission Foundation. My motto: “If they said no at the front door, and no at the back door, honey, use the Side Door.”

Bill was doing some important work over at Edge Admissions and Key Foundation with desperate housewives and pampered multi-millionaires who felt that generational wealth wasn’t enough to give heirs and heiresses happy faces. He assured them that money could actually buy what money can’t buy; merit - or more importantly – the Appearance of Merit. The heck with the work and talent. As Felicity and Lori will tell you, it ain’t about work or talent, it’s about getting to the red carpet, baby. What was really cool was that Bill’s methods - bribery, forgery, fraud, racketeering, mendacity, narcissism - were already familiar to his rarified customer base. We call it affirmative action for really, really rich white people. It works best when the client is a left leaning progressive/liberal with a media proclaimed moral compass who’s on right side of highly publicized social justice issues. Hypocrisy schlippocrisy!

It’s a pyramid scheme built on the accepted principle that the whole damned college admissions deal is a “game”, a “corrupt game”, so let’s screw it before it screws my little girl/boy. Every spring the whines of “Not Fair!” can be heard from Beverly Hills to Park Avenue all the way to Hong Kong. So, Bill did what any smart entrepreneur would do. As they say in the underwear ads these days; he found his own solution to the problem, i.e., pluck as many eggs from the Golden Goose as possible before she wakes up and cries fowl.

Now, Bill Singer’s not the only one who knows how to gouge big money out of the Fortune 500. It’s unfortunate that he snitched, but he’ll get his due; we’ll see how he does when incarcerated with the likes of Paul Manafort and Michael Cohen. I’m just disappointed that his rates were exposed. I don’t think the feds understand what a great deal Bill was giving folks. He should get his sentence reduced for being such a cut rate operator in the “cutthroat” business of college admissions, as the U.S. Attorney called it. Over here at Side Door we have our own college admission packages and, in the interest of transparency and professional scammer ethics, I’m going to publish some of our rates. I’ll dispense with the nuances and subtleties, tactics and strategies, but trust me, grades and test scores are a thing of the past. Why worry? Sign with Side Door and have a senior spring fling, worry free. “I got in! I got in! Wheee...meee…meeee…meee!” All results are guaranteed. Best of all the fee is a tax deductible contribution to the Side Door Foundation. So, let’s cut straight to what you want to know – the results and how much.

Harvard - $12 million. Harvard “schmarvard” we like to say. No problem. Next fall park your Ferrari in Harvard Yard.

Stanford - $11 million. Stash your cash at The Farm at Palo Alto where it’s always sunny, honey.

USC - $10 million. Easy-peasy. Those fake test scores and Photoshopped pic of you winning the Boston Marathon are the real Trojan Horses.

NYU – $10 million - Everybody’s favorite. Can you feel your Tony Award yet? You know you’re king of the hill, top of the heap so go to Tisch and get risch. (even more risch)

You get the idea. Our only focus is finding the right college for you, the one that fits your very-very specialness, which is the one your mom and dad are willing to pay Side Door to get you into.

If you really want to find out more about me check me out at www.college-pathways.com, or www.thecollegetransferguru.com. Or you can call me on my SAT phone on my yacht in the Caribbean.